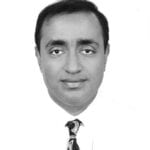 LLB (Hons) and LLM from Dhaka University. Enrolled as an Advocate of the High Court Division of the Supreme Court of Bangladesh
Visit Website
civil, commercial, banking, human rights, and constitutional matters

Asad received his LLB (Hons) and LLM degrees from Dhaka University in 1993 and 1994, respectively. He was enrolled as an Advocate of the High Court Division of the Supreme Court of Bangladesh in 1996. Prior to joining Chambers in 1998, Asad worked for a legal aid organization in Dhaka and also worked for chambers of Mr. Justice Md. Nizamul Huq, a present judge of the Appellate Division of the Supreme Court of Bangladesh.

Asad appears regularly before both the Supreme Court and the subordinate courts, civil and criminal matters, for the chambers. He has been dealing with civil, commercial, banking, human rights, and constitutional matters. He has appeared in various landmark cases in matters relating to taxation, civil and commercial law. He has also built up his expertise in litigation, admiralty matters and property disputes. Asad takes a keen interest in human rights issues and is involved with a number of charities involved in providing legal aid.